Towers became valuable territory in Stalingrad, with each one offering snipers and spotters superior fields of view.

The Stalingrad Ruins E – 15mm pack is a pre-configured set of Stalingrad ruins. They are designed to be printed in four sections, as shown below in the Notes section.

The Stalingrad Ruins E set is designed to fit in with the Stalingrad Ruin sets 2.0, A, B, C ,D and F.  The scale is set to 15mm, for games such as Flames of War. However, they can be re-scaled to 28mm to be used with games like Bolt Action. 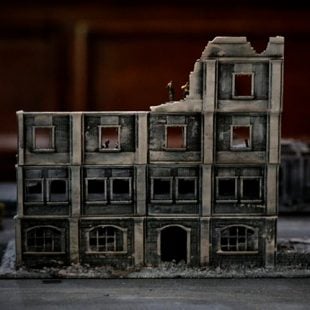