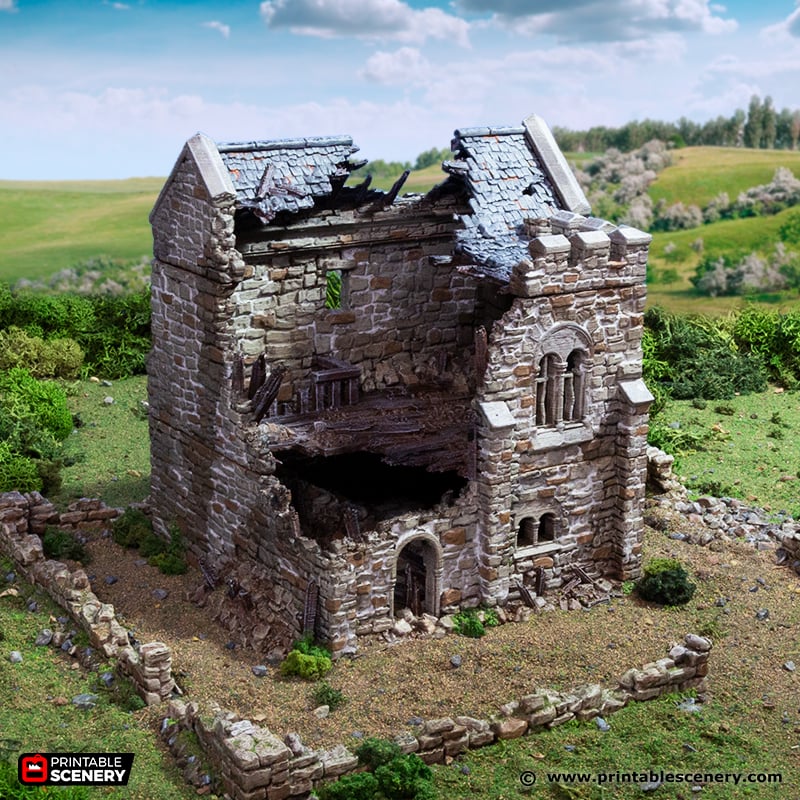 From war or time the Ruined Norman Keep provides realistic damage to its counterpart. Printing in 3 floors provides accessibility during gameplay and is easier to pick out details in its large rubble-strewn piles. Like the un-ruined versions, it can combine with the Ruined Norman Fort and Manor. 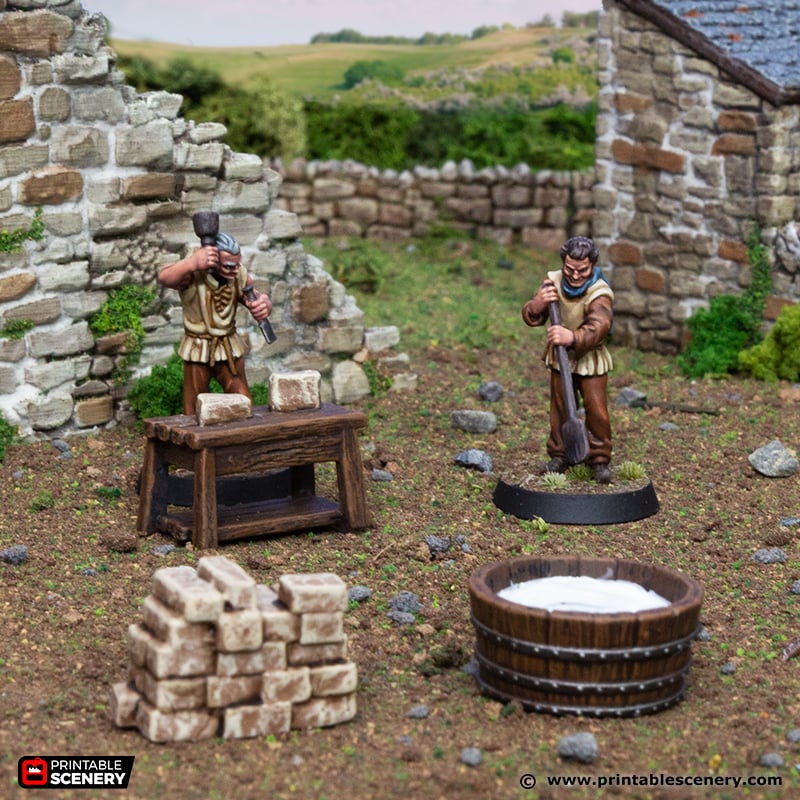 The Stone Mason includes two miniatures, a master and an apprentice, along with their trade’s essential tools and equipment. All the Stone Mason models are printed in resin and come with pre-supported files for printing in 28mm scale. 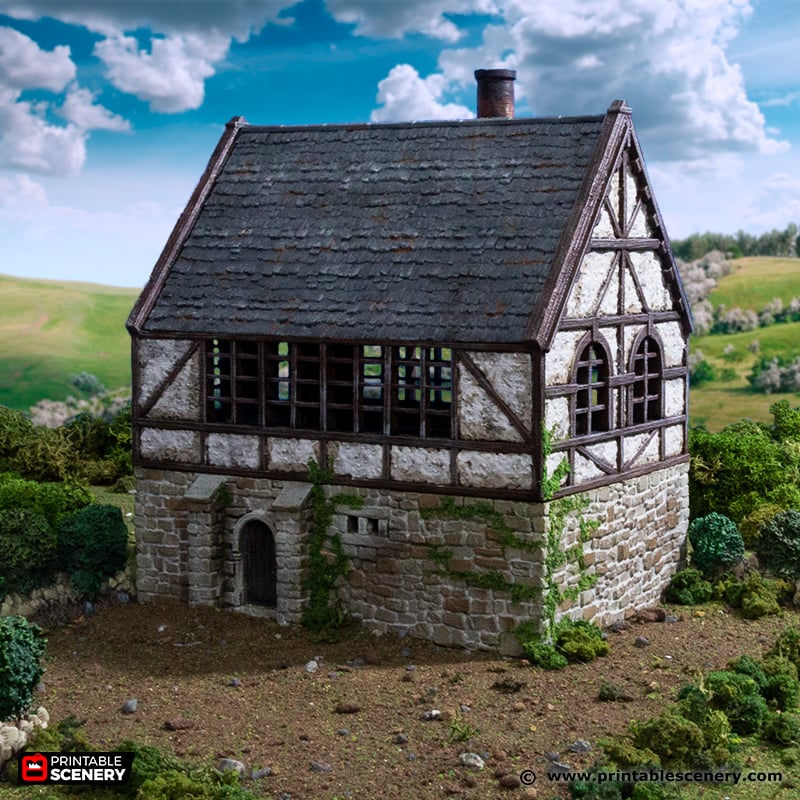 The Norman Manor Wattle & Daub version features an alternate second floor featuring a style popular throughout the medieval and middle ages. It seamlessly fits the tiled roof with locking pins, allowing it to be removed to access the detailed interior.

The bottom floor is the same as the original Norman Stone Manor. 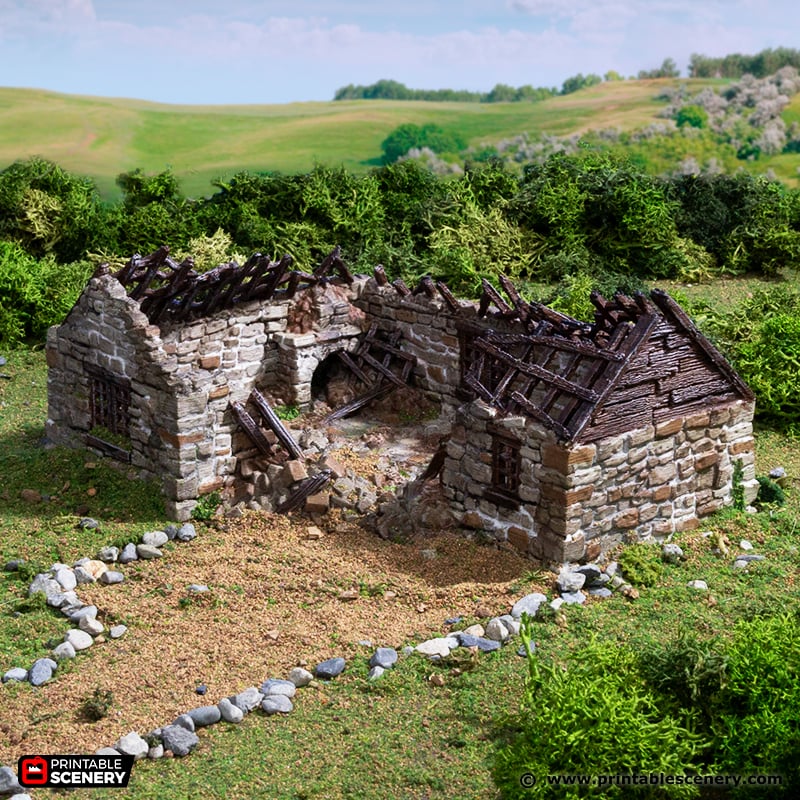 Based on Leanach Cottage, the Ruined Highland Stone Barn is a single piece building designed for wargames and RPGs. It features full interior detail including a fireplace and rubble piles, with plenty of room for miniatures to be placed in and around it to take cover. It represents a destroyed version of the Highland Stone Barn that could be swapped out mid-game. 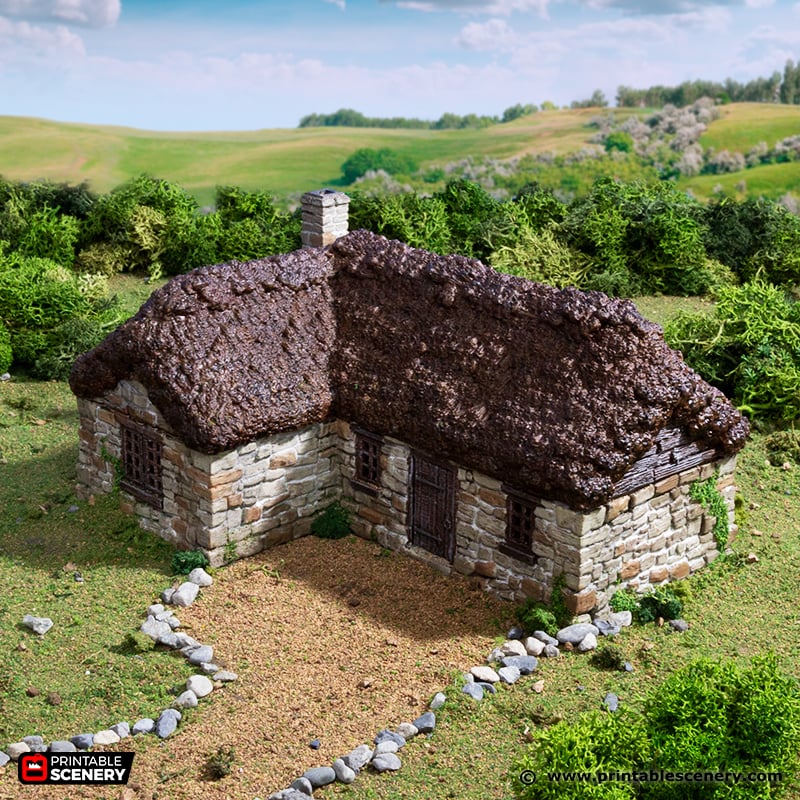 Based on Leanach Cottage, the Highland Stone Barn features a removable thatched roof allowing miniatures to be placed inside easily. Its detailed interior is accessed via the front door, which can open and close. 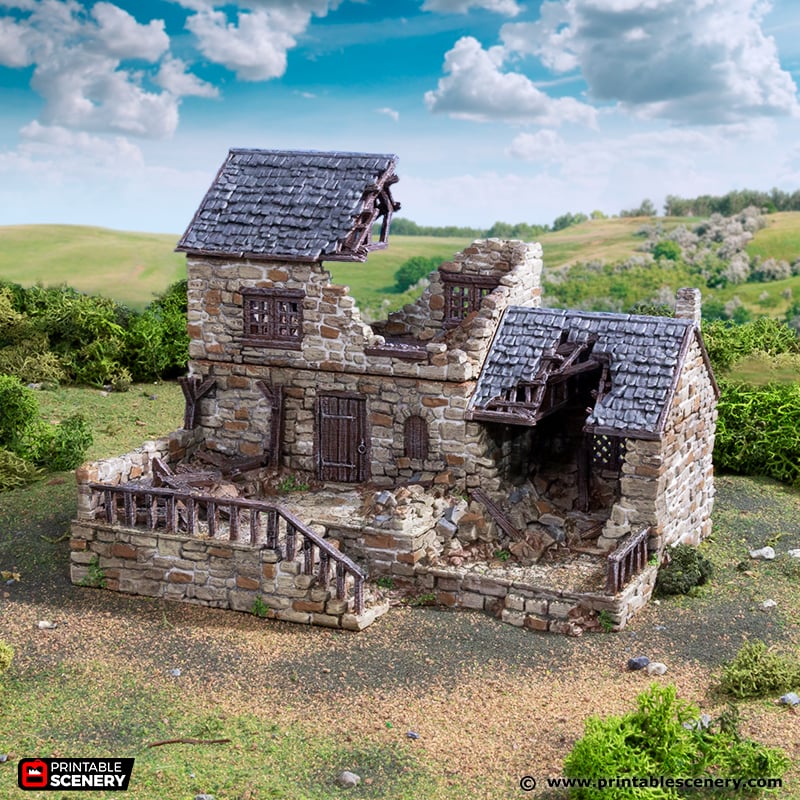 The Ruined Stonestreet Bakers represents a destroyed version of the Stonestreet Baker that can be swapped out mid-game. It’s upper floor provides room for miniatures to be placed whilst the piles of rubble add a realistic feel to the model. 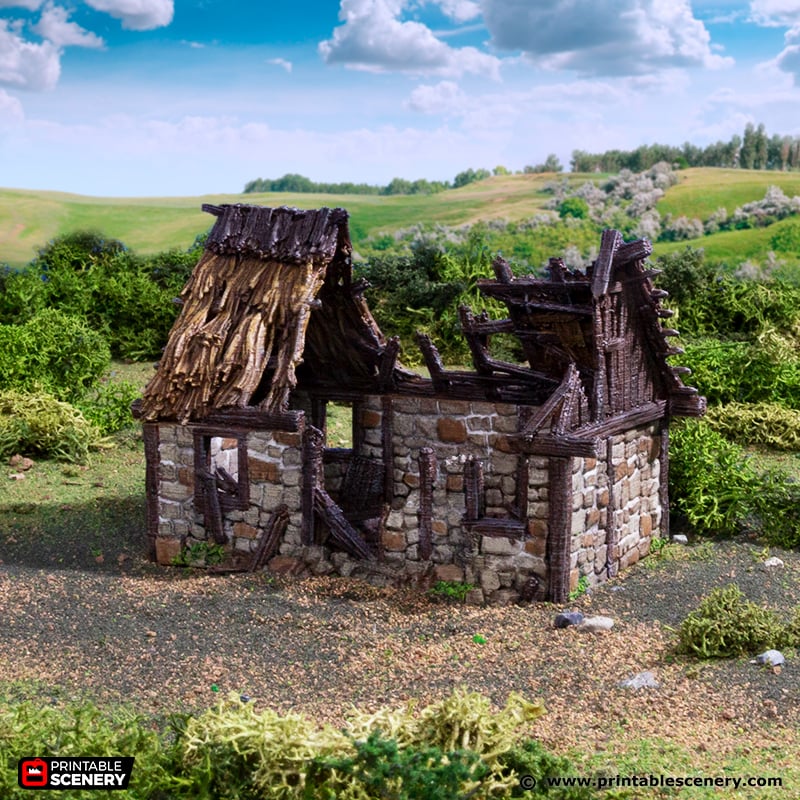 The Ruined Norman Stone Barn depicts a destroyed version of the Norman Stone Barn. Its open roof allows for easy model placement and the interior’s shattered remains add interesting details to the battlefield. 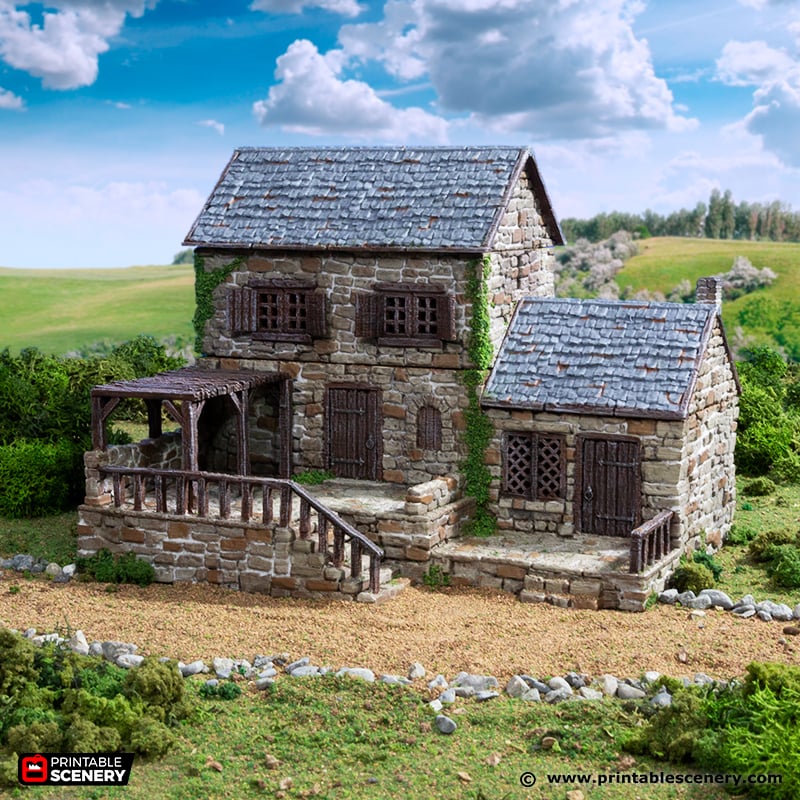 The Stonestreet Baker is a multi-room stone building with a raised entryway and verandah. Its removable roofs give access to detailed interiors including a staircase and baker’s oven. 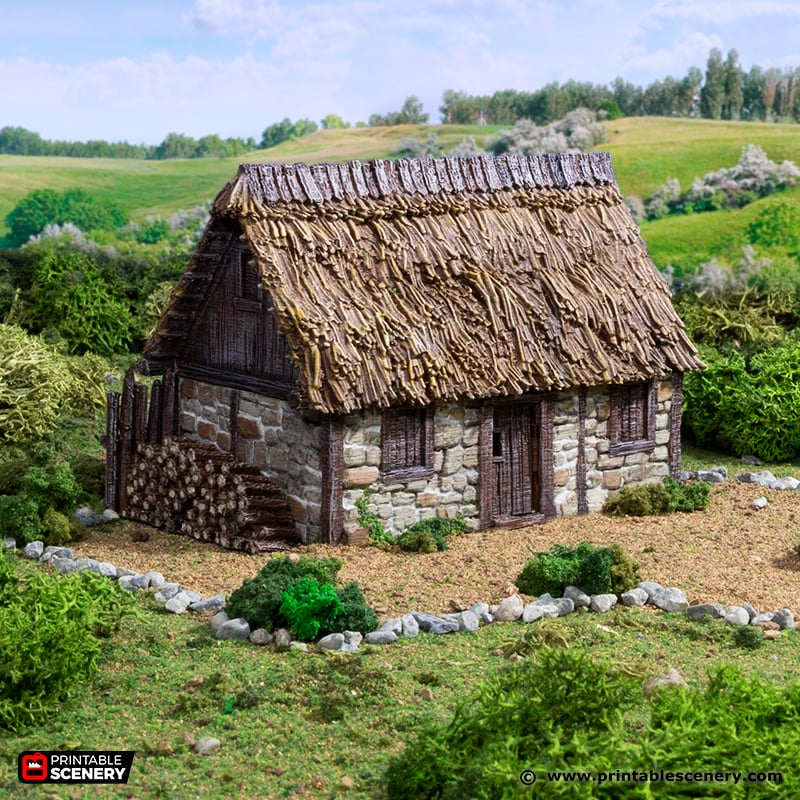 The Norman Stone Barn is a small structure with a removable thatched roof and hinged door for access. It also comes with a separate wooden log stack that sits against the building. The logs are unattached and fully detailed, allowing you to use this alongside other pieces, adding character to your tabletop. 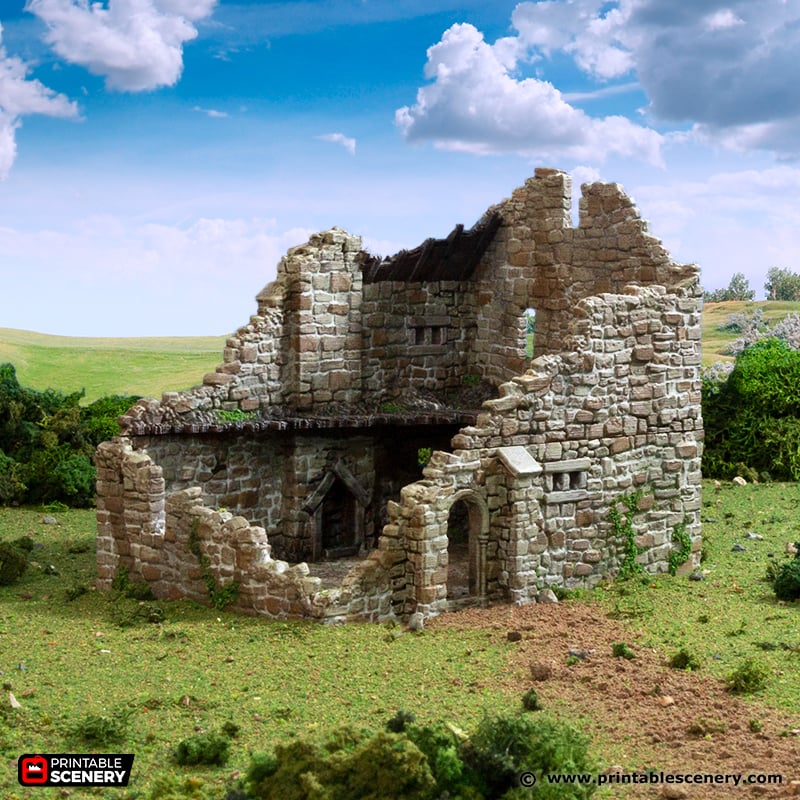 The Ruined Norman Stone Manor comes with two options for level 1, with rubble or without. This can be used to represent recent damage or faded ruins that have lasted for centuries. The upper floor is easily accessed by stairs with room for miniatures to be placed on the broken flooring.